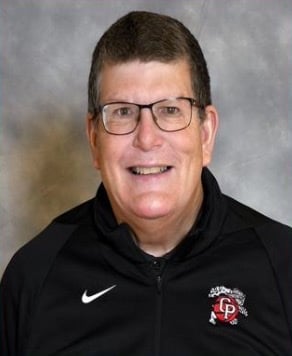 Scott Reid has been a basketball coach for nearly all of the past 42 seasons, 34 of them as a Crown Point girls’ basketball assistant coach.

A 1978 graduate of Crown Point, Reid played tennis, basketball and baseball while in high school. As a senior, he was a captain in basketball and an all-conference selection in baseball.

He returned to his alma mater as the boys’ basketball freshman coach from 1980-83, then moved to assist May with the Lady Bull Dogs for the next 24 seasons. When May stepped down in 2007, Reid was the program’s head coach for two seasons and followed by coaching the Taft Middle School eighth- grade team for two additional seasons. After a year out of coaching, he returned to the Crown Point bench, first assisting Equihua and then assisting Seibert.

“Coach Reid embodies the traits of dedication and integrity daily with the way he coaches and teaches,” Seibert said in nominating Reid. “He always has the players’ best interests in mind and is willing to do anything he can to help. He has mentored and guided countless numbers of players throughout this time, and he is more than deserving of the IBCA Assistant Coach of the Year Award.”

Reid and his wife, Janice, have been married for 41 years. They are parents to three adult daughters – Katie, Kristen and Amanda.