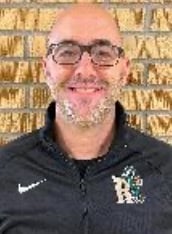 Tony Hasenour is an IBCA District 3 Coach of the Year after guiding Forest Park to a 26-3 season that included the Class 2A state championship. Along the way, the Lady Rangers also claimed trophies in the Forest Park Sectional, Crawford County Regional and Jasper Semi- State.

He has been chosen to be an assistant coach for the 2022 Indiana Junior All-Stars, and he has been named 2022 Evansville Courier & Press Southwestern Indiana co-Coach of the Year.

Hasenour began his coaching career in 2000-01 as the girls’ JV coach at Forest Park. He was also the Lady Rangers’ varsity assistant coach in softball for four seasons. He was on the softball staff for three sectional titles and the 2001 Class A state championship.

He is in his 22nd year as a teacher at Forest Park. He currently teaches eighth-grade social studies, high school world history and high school geography.

Hasenour and his wife, Janelle, have been married for 20 years. They have three sons – Calvin, 18, and twins Charlie and Will, 15.