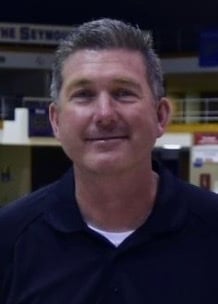 Manns is an IBCA District 3 Coach of the Year after guiding Seymour to a 15-7 season that included a runner-up finish in the Hoosier Hills Conference, the Owls' first winning season in 15 years. Manns is 33-34 in three seasons as the Seymour coach and his sixth year at the school after moving there initially as only the Owls' athletic director. He has an overall high school coaching record of 161-122, including a 128-88 mark in 10 seasons at Fredericktown High School in Ohio. A 1986 graduate of North Judson, Manns totaled 1,962 career points and led the state in scoring as a junior and senior with respective 33.0 and 34.2 averages. He was first-team all-state in both basketball and football as a senior. He then attended Michigan State, scoring 1,212 points for the Spartans, helping the team to a Big Ten title and the Sweet 16 of the NCAA Tournament as a senior. He still holds MSU records for season (.507) and career 3-point accuracy (.475). After college, Manns played professionally in Sweden for two years and then was a college assistant to Bob Donewald at Western Michigan for seven seasons, including a 21-8 squad in 1997-98 that won the Mid-American Conference Tournament and reached the second round of the NCAA Tournament. Manns served as boys basketball coach and athletic director at Fredericktown from 2001-11, then was athletic director at Mansfield (Ohio) Madison from 2011-16 prior to moving to Seymour for the 2016-17 school year.