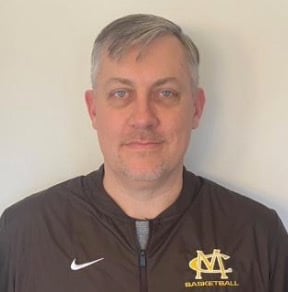 Ullom is an IBCA District 2 Coach of the Year after leading Monroe Central to a 25-1 campaign that included championships of the Connersville Holiday Tournament, the Randolph County Tournament, the Mid-Eastern Conference and the Alexandria Sectional. Ullom is 119-72 in eight seasons with the Golden Bears, a tenure that has included four Randolph County Tournament titles, one MEC crown and the school's first sectional trophy since 2010. He is a 1996 graduate of Delta High School, where he played basketball for coach Paul Keller. Ullom attended DePauw University and Indiana University for a time, but he departed college without a degree to start a plumbing, HVAC and water-treatment business in the Muncie and Anderson areas. He began his coaching career in 2010 at Delta under former coach Stan Daugherty. Ullom was freshman team coach for one season and the Eagles' JV coach for three seasons. He then took over the top spot at Monroe Central in the spring of 2014.