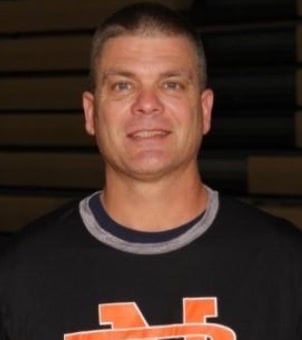 Dalrymple is an IBCA District 3 Coach of the Year after directing North Daviess to a 27-3 season that included the Class A state championship. In the process, the Cougars also captured a Southwestern Indiana Athletic Conference co-championship as well as titles in the Loogootee Sectional, Loogootee Regional and Seymour Semi-State. The 27 victories is a school record, five better than his 2010-11 squad. In 22 seasons at North Daviess, Dalrymple has a 316-213 record with six SWIAC titles, six sectional trophies and three regional crowns. Dalrymple is a 1988 graduate of Rushville High School, where he played basketball and baseball. He earned a bachelor's degree in 1992 from Saint Joseph's College in Rensselaer and a master's degree from Ball State in 1995. He served as an assistant coach to John Heaton at Shelbyville for five seasons before moving to North Daviess in 2000 as boys' basketball coach and athletic director. Dalrymple was an assistant coach for the 2013 Indiana All-Stars.