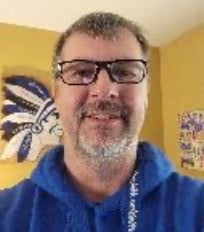 Anthony Thomas is an IBCA District 3 Coach of the Year after directing Waldron to a 24-2 season that included championships in the Shelby County Tournament, Mid- Hoosier Conference, Waldron Sectional and Southwestern (Shelby) Regional.

Thomas previously had coached for 17 years of various grade levels, both boys and girls, before becoming the Waldron varsity girls’ coach in 2017-18. That experience included serving as the Lady Mohawks’ girls’ varsity assistant in 2016-17.

A 1992 graduate of Waldron, Thomas played two seasons of JV basketball. He later attended IUPUI for one year but left college to enter the work force. Farming has been his primary occupation for 14 years.

Thomas is married to Heather Ross, and the blended family has six children. They include Lindsey Thomas, 24; Lauryn Thomas, 19; twins Hadlie and Hallie Ross, 18; Matthew Thomas, 16; and Grace Ross, 15.

Coaching has allowed him to be on the bench with all five daughters – Lauryn, Hadlie and Hallie for four years each, Lindsey and Grace for one year each.